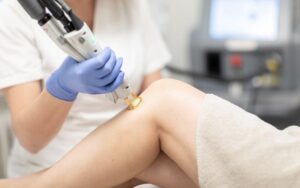 A laser beam is an independent beam of light with a specific wavelength and traveling in the same direction. This light beam is dropped on the skin by means of laser devices. Then, the heat energy is released that mainly affects the hair. The melanin contained in the hair that are in the active phase is selected by the laser beam. The hair that absorbs this light acts as a conductor and transmits the light energy, resulting into heat conversion, is delivered to the hair root. The aim is to destroy the hair and the cells that feed them, thus minimizing or completely destroying the hair production. Laser devices vary according to wavelengths. Alexandrite, Diode and NdYag are lasers used for epilation. Frequently preferred ones are Alexandrite and Diode lasers.